Despite our short 4-day stay in Singapore, I was lucky enough to spend time with friends I hadn’t seen in years. David and I went to high school together in Astoria, Queens and it’d been 8 years since we last saw each other. David is now working and living in Singapore and treated us to a fantastic dinner at Song Fa Bak Kut Teh, one of the most well-known Bak Kut Teh restaurants in Singapore.

We originally set to meet at the New Bridge Road location, but once E and I arrived, we pretty much feared that dinner wouldn’t be for hours. I still wish I took a photo of it, but the line at Song Fa was so incredibly long and stretched down the sidewalk, you would’ve thought they were giving away the Bak Kut Teh for free. And this is when having an insider wherever you travel comes in handy. David arrived a few minutes later, saw the ridiculous line, and told us about another location about a 10-minute walk away. We waited less than 5 minutes for a table at the Chinatown Point Song Fa location.

For those who haven’t had the pleasure of sipping on Bak Kut Teh, or 肉骨茶, literally “meat bone tea” in Chinese, this is the kind of dish that will warm your soul, especially apt as NYC is currently experiencing Snowmaggedon Jonas. In its simplest form, which is what I ordered, pork ribs are simmered in a broth of spices and herbs for hours. After that amount of time, the ribs were perfectly-fall-off-the-bones-tender. Bak Kut Teh is extremely popular in Singapore and Malaysia, and originated from the Hokkien and Teochew communities, which helps to explain the origins of its name. 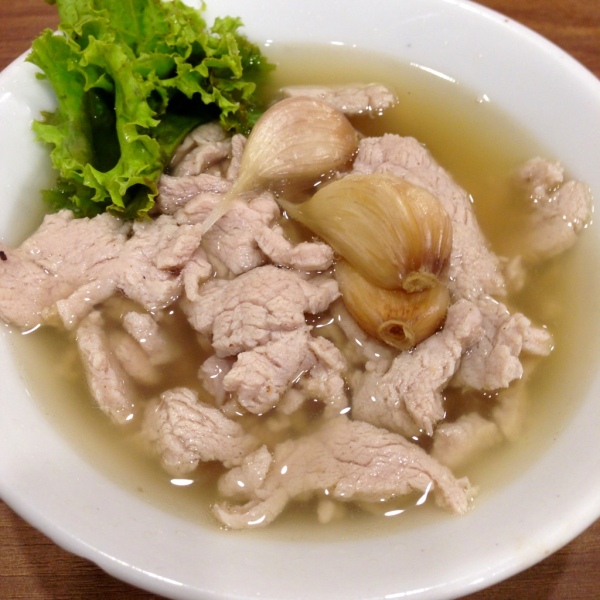 I also highly recommend the pork tenderloin Bak Kut Teh–without bones, you can down this bowl as fast as possible and order another.

Traditionally, Bak Kut Teh is served alongside youtiao, 油条 (Chinese fried dough) for breakfast. It’s now more common to have it any time of the day, which is great for someone like me, since I’d be perfectly happy with this aromatic dish for breakfast, lunch, and dinner.

We also ordered the pig’s stomach soup, which was just as savory and comforting as the other two. You might also be wondering about the “tea” part of “meat bone tea.” Despite taking up a third of the name, there is no tea that goes into making Bak Kut Teh. Instead, drinking tea with this meal is highly encouraged to help counter the fatty meats, which is probably why Song Fa offers a selection of teas to go with your meal. It’s also no surprise since both the Hokkien and Teochew are deeply tea-infused cultures.

As stated on its website, Song Fa started as a pushcart stall in 1969 and has since expanded to six outlets in Singapore and four in Jakarta. If you’re traveling through these destinations, Song Fa should definitely be one of your stops.

On our last day in Singapore, I was determined to visit the neighborhood where my dad grew up, and place a physical location to all the stories my dad told when I was younger. East Coast Road and Marine Parade Road: I heard these names frequently, but wasn’t sure what to expect when I finally arrived. What I found was completely different than what I’d imagined and what we’d seen in downtown Singapore and other more touristy areas. Some structures remained the same, (like the ones in the photo above–old-style Singaporean shophouse architecture) but many others were torn down and in their place were modern high-rise apartments; there was also plenty of construction going on, and the neighborhood seemed to be changing before my eyes–I’m guessing that if I head back anytime soon, it’ll look different yet again.

Exploring the area gave us the opportunity to feast on some of the best laksa I’ve ever had and spend downtime in a cafe where I’m pretty sure we were the only tourists.

Started in 2005 as a food stall, and now with over 70 outlets, Toast Box is a coffee and toast chain in Singapore. After strolling along East Coast Road, we had some pre-dinner snacks, including this rousong (dried pork) toast with condensed milk. I didn’t expect to like it as much as I did, but the sweet condensed milk with the savory rousong made for a mouth-watering combination. As you can see, Toast Box is also known for their thick-cut toasts. When ordering, you can choose between “traditional toasts” or “thick toasts.”

Kaya Toast is a popular snack in Singapore and you’ll pretty much find it at any coffee/toast shop. Kaya, also sometimes referred to as coconut jam, is a mixture of coconut milk, sugar, eggs, and pandan (pandan is a green plant that grows in the tropical Southeast area and is often used to sweeten desserts or drinks). We ordered the traditional kaya toast, which came with a spread of kaya and a slice of butter, sandwiched between two thin cuts of toast. For my dad growing up in Singapore, kaya toast was very much a staple food. 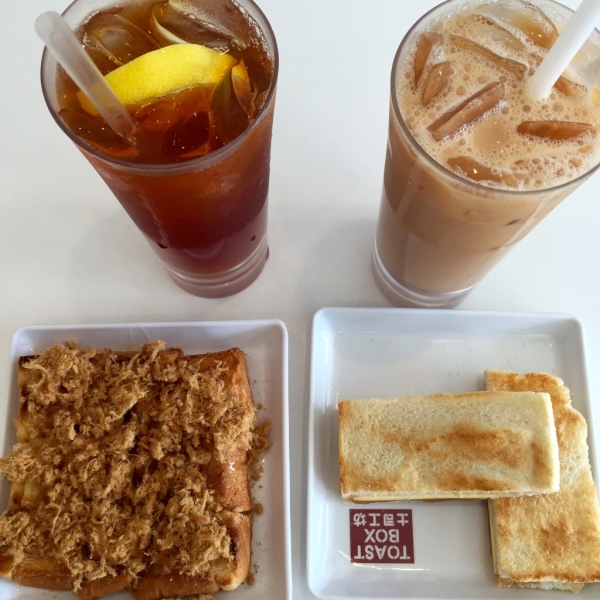 Our pre-dinner snacks also included an iced lemon tea and iced coffee with condensed milk, better known as kopi. As you travel throughout Singapore and other Southeast Asian countries, you might see “kopi” for “coffee” and “teh” for “tea.”

Although Toast Box has been around for 10 years now, it’s still considered a newcomer compared to Ya Kun Kaya Toast. Ya Kun is one of, if not the oldest coffee and toast chain in Singapore. As you can see from the sign, it’s been around since 1944. Although we had the pleasure of having Ya Kun in Singapore, we loved it so much, we also had it in Bali, Indonesia and Manila, Philippines. We regularly ordered the kaya toast and iced coffee. Since franchising, the quality of Ya Kun has varied from country to country–the best coffee we had was still from the Ya Kun in Singapore.

328 Katong Laksa came highly recommended and is around the corner from the home my dad grew up in, so naturally, we scheduled laksa for dinner on our last night in Singapore. Despite the hot weather, it’s never too hot for laksa, as attested by all the diners gathered outside the restaurant.

Both inside and outside the restaurant, the walls were entirely covered with either reviews such as the ones above or photos of the owner with well-known celebrities, both Asian and non-Asian.

With fewer than 10 tables inside and offering a grand total of 3 items–laksa, nasi lemak, and otah, 328’s short menu immediately delighted me (for the same reason I wrote about in my previous post on hawker stalls). The owner was a vivacious and energetic woman who talked to us about laksa and growing up in Singapore. 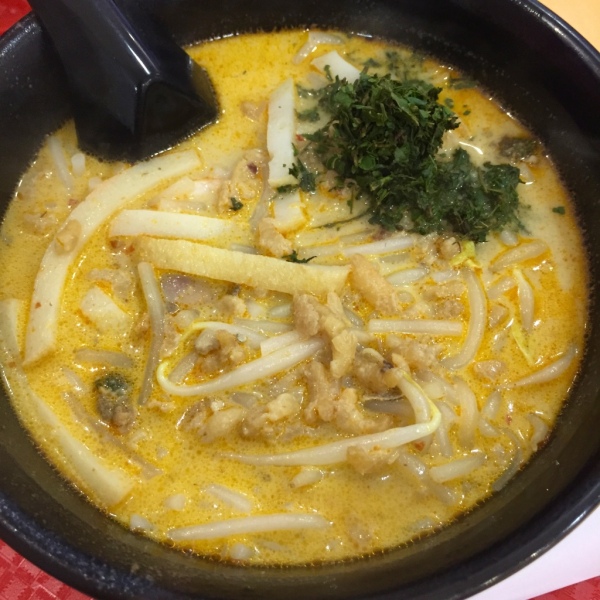 And finally, the long-awaited laksa. I’m pretty sure the owner knew we were tourists once we asked for chopsticks, which were completely unnecessary. Unlike other laksa varieties, Katong Laksa comes with cut up pieces of short noodles. The spoon was perfect for the short strands, so every spoonful was full of the rich, thick, coconut broth, noodles, fish cakes, shrimp, and bean sprouts.

*Special thanks to David Royster for his generosity–for not only treating us to a fantastic dinner, but for his generosity in time, sharing his abundant knowledge of Singapore and traveling, and for doing all this despite my last minute communication. Sending you lots of hugs and many thanks, David.