Although we were only in Singapore for 4 days, every day was pure food bliss. After landing at 7pm, tired and hungry, we worried about finding good food after spending the day eating at airports. Luckily for us, just a 10-minute walk from where we were staying in Geylang was 126 Eating House, a 24-hour dim sum spot. YES, YOU READ THAT RIGHT, 24 HOURS, ALL DAY long, 7 days a week.

Side note: if you can read Chinese and understand Cantonese, 126 揾到食 is such clever wordplay, you’ll probably laugh out loud once you figure it out–at least I did.

Let me just start off by saying that even right now, I regret not getting an extra plate of this. I’m not sure where else this dish is served, but I’ve never had chicken curry changfen at any dim sum spot, let alone any restaurant before. This beautiful dish came piping hot as I imagine the curry was ladled out of a giant pot right before it devoured the rolls of changfen, which by the way, was cut into smaller bite-size pieces. The smaller pieces were perfect for dipping and drenching in curry. Needless to say, we left a clean plate.

Can someone please tell me where to get this in NYC?!

Maybe I forgot to mention this, but we sat outside where 126 set up curbside tables (they also have seating inside) and even at night, we were sweating. Like most of Southeast Asia in the summer, it was HOT. Which is all to say, I was even more grateful for this homemade sugarcane juice served with a slice of lemon. Perfectly thirst-quenching.

A few other dishes we ordered included steamed pork buns, shrimp dumplings, and shumai. No complaints here, although to be honest, we ended up dipping everything in the curry…

By the time we finished eating dim sum at around 10pm, we decided to search for a snack and discovered just how bustling Geylang was on a Friday night. Streets were packed with restaurants and restaurants were packed with people. After seeing the crowd at Lorong 9 Beef Kway Teow, we headed in and ordered a small beef kway teow and an iced tea. Lo and behold, this massive dish arrived at our table within 1 minute of ordering. I actually asked the server again to make sure it was indeed a small. Although this was more than just the “snack” we were hoping for, the beef was quite tender and the gravy wasn’t overly salty. As we left the restaurant, I spied around at other tables and found beef kway teow dishes way larger than ours–lucky, lucky folks.

By the way, if you’re ever in Geylang, don’t be surprised at all the stands and supermarkets selling durian; although Geylang is better known as Singapore’s red-light strict, it is also known for its durian shops. If you look closely at the lefthand side of the photo, you’ll see people sitting down–many places offer tables and chairs so you can enjoy your durian right away. If it isn’t clear already, the Singaporeans love food, and they display their love affectionately, which also explains all the large durian signs you’ll see as you walk along many of the busier roads.

Introducing: Hawker Centers. If you haven’t been to Singapore, you’ve probably still heard about how food-obsessed Singaporeans are; hawker centers are a good visual example of this passion. Maxwell Food Centre is a well-known hawker center in Chinatown and as you can see from the photo above, hawker centers are essentially a space where you have lots of variety because of all the vendors available. What I noticed and appreciated was the fact that most stalls focused on 1-3 of their own staple dishes. Unlike food courts where you see a lot of large chains or huge menus, having a small menu allows vendors to spend their time focusing on the quality and taste of those few dishes.

We received recommendations for Tian Tian Hainanese Chicken Rice from a few sources, which is how we ended up at Maxwell Food Centre. We arrived a little after 11am and the line stretched around the corner and down the hall. Despite how long the line was, it moved relatively fast–I’m guessing having the option of chicken or chicken helps with efficiency.

Interestingly enough, there was another Hainanese Chicken stall just a few feet from Tian Tian. Plastered all over its stall were news articles on the ex Tian Tian chef who left and opened his own business. *insert drama* Tian Tian exploded with popularity after it was featured on Anthony Bourdain’s No Reservations. Our verdict?

If you’re going to go with the masses, I highly recommend ordering the half or whole chicken, depending on the number in your party. True to its reviews, the chicken was extremely juicy and tender, almost velvety as it slides down your throat. 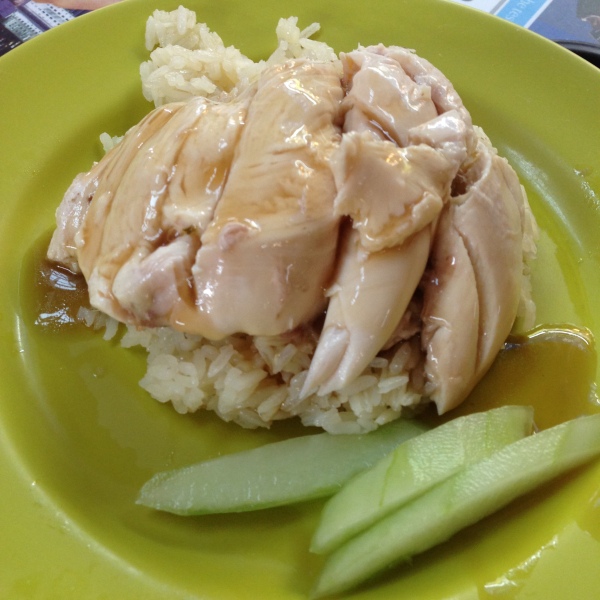 We also ordered the chicken and rice combination and actually left most of the chicken untouched. The chicken that came with the rice was much dryer and I found myself chewing endlessly. The chili sauce (not pictured) also wasn’t very memorable, but I did find myself enjoying the chicken rice–it was flavorful and savory. Although it wasn’t the best hainanese chicken I’ve ever had, overall, I enjoyed Tian Tian and the experience of seeing Anthony Bourdain’s effects. If he wants, he should go and try my dad’s hainanese chicken though–no joke, it’s the best I’ve ever had.

*Special thanks to Hudson Leung for his extensive food recommendations.

When you spend the morning & afternoon getting in some good writing, you deserve a reward: honey glazed wings, buffalo wings, and jalapeño poppers 📝➡️🍗🍗🌶 📍 Sterling Market 🗻 Johnson, Vermont #️⃣ #nomwithmerecs
Some of you may know why I've been MIA, but for everyone else: I'm at a writing residency in Johnson, Vermont! 📝 Have been meeting so many great people & feeling so fortunate... Except the food adventures have not been happening as much since Johnson is not NYC (really, not even close). Today's excitement / writing procrastination resulted in a trip to the library and these glazed donuts 📚🍩 all of which will be accompanying as I attempt to write 😶 PRO TIP: a box of donuts will help you make new friends 👫👬👭 📍 Sterling Market 🗻 Johnson, Vermont #️⃣ #nomwithmerecs
Exactly one week of insanity has passed, at least there's #tacotuesday 🌮🌮🌮 the pollo asado at @lostacos1 kept me warm during the crazy weather today 🌧 #tacostotherescue 📍 Los Tacos No. 1 🗽 Chelsea Market, NYC #️⃣ #nomwithmerecs
When you get to Wah Fung & can't decide what you want #getitall it's going to be a long night 😓 #ElectionNightEats 🐷🐽🐔🇺🇸 📍 Wah Fung No. 1 Fast Food 🗽 Chinatown, NYC #️⃣ #nomwithmerecs
EAT PHO & GO VOTE. Spent the day volunteering for @hillaryclinton and making sure we put that #NastyWoman in office 🙋🏼 Make your voice heard #ImWithHer #FoodIsPolitical 🍜🇺🇸 📍 Pho Bac 🗽 Elmhurst, Queens #️⃣ #nomwithmerecs
When you buy too much dim sum & try to fit it all in the frame 📷 but you're also like damn let's just eat already 😒 quick shot of all the goodness from Flushing this morning 🤗 📍 Corner 28 🗽 Flushing, Queens #️⃣ #nomwithmerecs